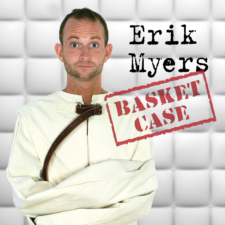 “Raspy-voiced and angry in the most delightful way possible, Generation X member Erik Myers has opinions on the current generation that might just ruffle some millenials feathers.”    – Jude the Comedy Dude,  NOW HEAR THIS MUSIC

“With his fierce temper, Myers delivers a high-energy performance as he spitfires hard-hitting punchlines. His voice is as distinguished as Bobcat Goldthwait, as loud as Sam Kinison, and not a bit of that energy lets up throughout the album. Myers will grab hold of your ears and won’t let go until the very end.” – Mikhail Chernyavsky, Medium

“Gen X Man” is an ode to the 1990s, the era when Erik Myers grew up. Erik is confused and pissed off by modern, flawed “conveniences” like ride-sharing and texting. The comedian indulges in sarcastic tirades about elusive, online dating practices, vanity, modern misnomers, and timeless idiocy to haggard, “back in my day” perfection. While Erik concedes that living during the Clinton administration wasn’t as harrowing as his parents’ and grandparents’ upbringings—“Just got drafted into World War II #fml”—he advocates that corded phones, CDs that skipped and the indecipherable, adult movie channel built resilience and character. For instance, the lessons learned in “Land Mind,” a track that features Erik’s tale of youth, love, and a promotional tie-in for 1998’s “Men in Black,” is a rollicking, heartfelt, incisive highlight to this stellar comedy album.