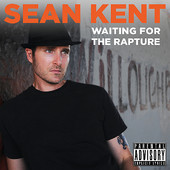 Sean Kent – “Waiting for the Rapture”

“Pig Life” is the eagerly awaited third album from prolific comedian Sean Kent. A master of dark wit, Sean gives you his incisive, hilarious take on sexual politics, social media, God and everything in between. You can never tell where Kent’s endlessly creative mind will take the listener, only that the trip will be worth it and that you’ll laugh the entire way.” 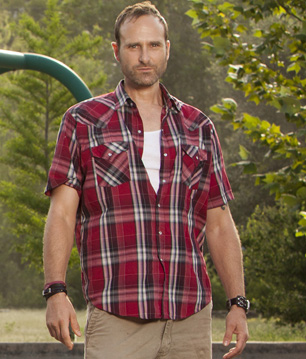 You will be able to see Sean Kent “dad” it up as he calls it on the A&E show “Modern Dads” that premiers this Wednesday, August 21st at 10:30/9:30 Central. “Modern Dads” features four stay-at-home dads who may be a little unconventional, but they get the job done. Banding together, their “guys club” is a tribe of suburban, child-rearing dudes who are just trying to do their thing with a kid (or four) on their hip.

While Sean’s girlfriend Rachel is busy getting ready for her job running a tech startup and painting canvases that hang in galleries around the country, Sean can regularly be found casually waiting with his daughters at the bus stop while wearing ridiculous costumes. This isn’t Sean’s only manner of entertaining–and humiliating–his kids; he’ll look for any way to make an ordinary situation into a laugh. However, this playful family’s life wasn’t always so fun.

In 2003, at only 29 years old, Sean Kent was diagnosed with Hodgkin’s lymphoma. Initial treatments eliminated the cancer, but it returned with a vengeance just months later. The doctors at City of Hope Hospital had to operate quickly, performing a bone marrow transplant that narrowly saved his life, though the outlook remained grim. Sean was told he had a 50/50 chance to live out the year.

It is now 2013, a decade later, and Sean’s cancer is in full remission. In 2007, he moved in with the love of his life, Rachel, and her two young daughters, Arwen and Joopsy. Since then, it’s been six wild years of parenting and mentoring, building and bandaging, teaching and learning, protecting and providing, listening, laughing, and loving. And wearing costumes. Check out his website here to see when he will be doing is standup in your area!

AE: First off I have to say congratulations on the show. Tell me about how you got involved in “Modern Dads” and what you thought about the show at first to now where you have a few episodes under your belt?

Sean Kent: They had talked to me about doing a show about stay at home dads. I said I don’t know why you are talking with me because that is not really my life. I don’t sit at home all the time. I travel about nine to eleven days a month doing standup, but then I thought about it. The times that I am home, which is more than two thirds of the time I stay at home and I raise the kids.

To me dad is a verb and not just a noun. I dad hard. I dad from the minute I get up to the minute I go to bed. So in that sense I guess I am a stay at home dad. They wanted to call the show “Modern Dads” and we are four dads in different stages of being a father. I am sort of a stepfather I guess you would say. I am really the only father that they have known from the time that they were one and a half and three. I have been raising these kids. Their mother and I aren’t married yet, so I am really a very modern dad. 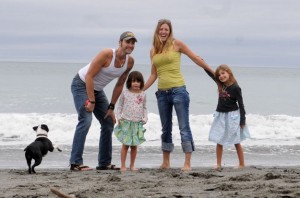 AE: It seems that you guys all get along on the show. Did you know all the other dads beforehand?

SK: I knew Stone (Slade) in high school. I grew up in Austin. I used to go to the Austin High parties in high school because they had better parties than we did. I went to a private Baptist school so it wasn’t that much fun. I always say that we used to chase girls back then. Then I grew up and he grew up. I moved back to Austin a couple years ago. You hang out with guys who have similar interests.

Now we are chasing girls again only he is chasing one because she won’t put her pants on to go to school. I am trying to get one to go to soccer practice. So our lives are way different. I met Nate (Hall) in college. So Stone and Nate kind of met through me. I think we got Rick (Lucas) off of Craigslist. I am not sure how he got into the picture. He just one day started hanging out with us at the park. Then next thing you know it is like alright I guess you are coming to dinner.

AE: What do you want people to take away from the show? 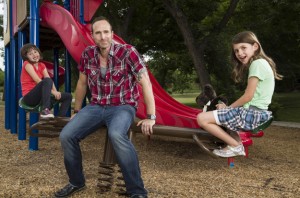 SK: That it is okay to not be disengaged from your children. I grew up in the generation that my dad was there when I did something wrong. That was when he would pay attention to me. It is okay to be a super involved parent. It is also okay to talk to other dads about being a father and to help other dads out.

It is getting less like this, but dads are reluctant to turn to other dads to for help. Women have no problem doing that. There have been mom groups since the first two moms had children. I am sure that they formed a Sunday playdate. Men tend to be less informal and I hope that this sparks a revolution and guys start hanging out with other guys that are dads. You got to keep your friends and you got to ask them for help. It is great to have these other four guys that can help out and help me through it.

SK: As far as balancing the comedy career it is hard when you are not there because you can parent them. That nine, ten days a month doing that and letting them know that I still love them and that I am there for them and that they can still talk to me it is hard.

Like I said when I parent, or when I dad, I dad with the intensity of a thousand suns. I am big on reading time. Let’s read the book. You read and then I read.  Let’s do something creative now. Anything besides watching TV and playing on the computer. I like to engage my kids and encourage them on a daily basis. It is really hard to do that over the phone.

It is a good life because I get to do what I like to do during the day, which is to be a dad.  At night I get to pursue my dream. So I am kind of like Batman, except I am my own butler.

AE: Yea, I was going to say who would be your Alfred?

SK: Yea, I am Alfred. Make no mistake I am definitely Alfred.

AE: You had Hodgkin’s lymphoma and I am happy to hear that your cancer in full remission. How has beating cancer changed your view on life and what you teach your kids?

SK: That is a lot for a kid to take in. I think that they will appreciate it more when they get older. I don’t even know where to begin with them on that. I talk to them about it by saying, God I am so lucky. I had it, but the doctors took it away. That is about all we touch on. I have shown them pictures of me when I was going through treatment. They are like, you look ugly.

It is has been a tough subject around the house because grandma was terminally ill for about a month year and a half.

AE: What advice can you give to new stay at home dads?

SK: I would say to count your blessings every day. Your children are your biggest blessing. Don’t be afraid to sacrifice your career or anything to make time for them. Nobody has been on their death bed and said, ‘Man I wish I would have been at work more and spent less time with my kids.’

You can hear the entire interview next month on the Life of Dad Show.

Hey Modern Dads, and Moms! Submit a photo of your best DADGET to show us how you’ve hacked parenthood and you could win a $1,000 gift card to be used to fulfill your dadget invention! Enter on Facebook by uploading your photo in the ‘Submit An Entry’ section, or by posting a photo on Instagram or Twitter tagged with #DADGET. For more info log on to the Modern Dad’s Facebook page!