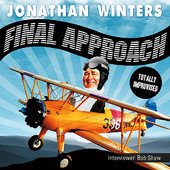 Meet Jim Smith, Jonathan Winters’ peripatetic buddy. Regardless of season or time of day, Jonathan can never reach Mr. Smith by phone … but that’s a stroke of luck for fans of comedy’s most beloved genius. This recording is made up of actual phone messages left by Jonathan Winters on his friend’s answering machine. The result, “Cranky(y) Calls” the winner of the Grammy Award for Best Spoken Comedy Album in 1996, is a tribute to comedy’s brightest mind at his improvisational best.

Jonathan Winters is a one-man theatrical troupe. His improvisational genius instantly creates characters, voices, sound effects and stories to entertain his audiences. Jonathan Winters is more than a comedic genius. His wealth of creativity is also expressed through his brilliant work as a fine artist and his talent as a bestselling author.