“Brian Regan Live!” is Brian Regan’s debut album released in 1997. Brian Regan has developed into one of the nation’s most sought-after comedy headliners, offering up a joyful, warm and purely fun act that rocks the room like nobody’s business. Brian’s light-hearted charisma has a way of charming the pants off everybody in sight. His act bounces along in the spirit of outrageous goofiness, without resorting to low-rent humor. Brian works mercifully clean, with no profanity, no crass jokes, no shock value. Instead, he takes us on a free-wheeling tour through the simpler sides life.Before making the bold decision to leave school during his senior year at Heidelberg College to pursue comedic greatness, Brian Regan played wide receiver on the football team and had plans to follow in his father’s footsteps and become an accountant. His football coach, however, saw something else in Regan and encouraged him to consider theater and communications. It was sound advice that changed the course of Regan’s life and propelled him into a comedic career that has spanned over three decades.

Inspired by the works of Steve Martin, The Smothers Brothers, Jerry Lewis, and Johnny Carson, Regan takes a smart, observational, sarcastic, and self-deprecating approach to humor. Although it is not his mission, he is known for his lack of profanity and his ability to reach a wide audience. Regan offers up a “double-barrel” approach to comedy that requires a solid mix of silly and smart. Without realizing it, Regan’s father groomed him to perfect this combination. His father’s contagious laugh forced Regan to be funnier, and to reach just a little harder to deliver the kinds of jokes that would pack a punch and be humorous in a creative way. Regan says, “It has to be interesting, clever, and ironic. It couldn’t just be buffoonery. It had to be something that was thought out. It was fun to sit there and go, man, I thought of something, and said it, and he’s laughing. 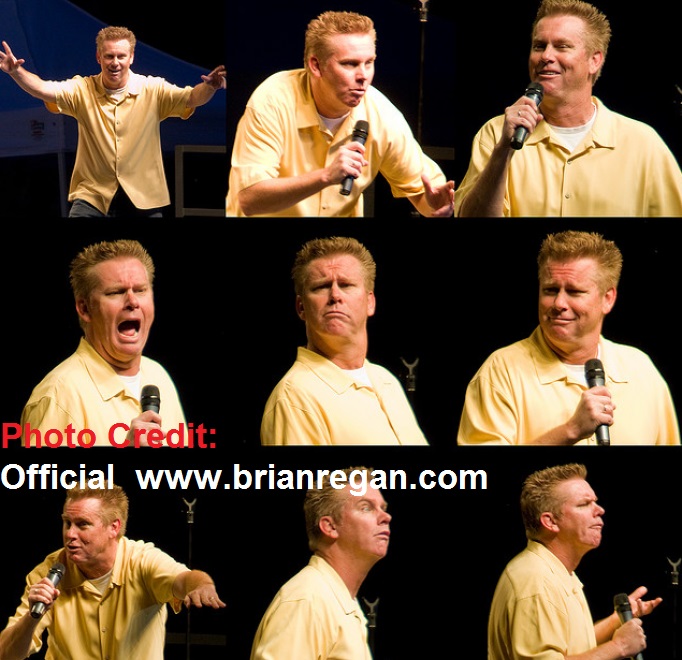 In 1995 Brian won the American Comedy Award for “Best Stand-Up Comic – Male”. Regan’s career has included Comedy Central specials, “The Epitome of Hyperbole” (2008), “Standing Up” (2007), and “I Walked on the Moon” (2004). He also appeared in the Chris Rock movie, “Top Five” (2014), and on Jerry Seinfeld’s web series, “Comedians in Cars Getting Coffee.” In May 2015, Regan made his 28th and final stand-up performance on “The Late Show With David Letterman,” which is more than any other comic since the show began on CBS. He made history again in September, 2015 with the live broadcast of his stand-up special “Live From Radio City Music Hall,” the first live broadcast of a stand-up special for Comedy Central. Aptly labeled “a comedian’s comedian,” Brian Regan is a very funny, and very genuine. Regan is proving that his best just keeps getting better.

Be the first to review “Brian Regan – “Live”” Cancel reply